Scientifically, Total Dissolved Solids (TDS) means all dissolved solids/salts. It includes monovalent salts (single charge – both positive and negative) such as sodium and potassium (NaCl and KCl). It also includes all multivalent salts (two or more charges on both positive (cations) and negative (anions)) such as Calcium, Magnesium, Barium, Strontium, Iron, Manganese, Lead, Arsenic, Calcium chloride, Magnesium chloride etc. All of these salts will be in dissolved form. Hence the name, “Total Dissolved Solids”.

The multivalent salts also contribute to hardness. How? At a suitable pH, they precipitate out. Though we consider these multivalent cations as hardness, they are all part of TDS. So, when we reduce/remove them from the water, we are actually not only reducing/removing hardness, which can cause scale and corrosion, we are also reducing TDS. These insoluble salts of multivalent cations build up as carbonate, sulfate, phosphate, and sulfide scales. Some of the scale might be corrosive or enhance corrosion. This scale build impacts the asset integrity, flow assurance, and overall efficiency, eventually leading to equipment failure and plant shut downs.

All insoluble salts are mostly carbonates, sulfates, phosphate and oxides. The anions – such as carbonate, bicarbonate, sulfate, and phosphate also play a big part in scale and corrosion. Most of these will impact the pH of the water, and depending upon the equilibrium of carbon dioxide or carbonic acid, bicarbonate and carbonate equilibrium might create a corrosive environment.
Microbially-induced/influenced corrosion (MIC) and scale are caused by the presence of oil field microorganisms such as Sulfate Reducing Bacteria (SRB), Acid Producing Bacteria (APB), Archaea etc. If the water has iron and sulfate in the presence of the SRB, eventually the sulfate will be reduced to sulfur and react with iron to form iron sulfide, causing both scale and corrosion. If both APB and SRB are present, there is higher risk of corrosion as acid increases the corrosion rate. These bacteria lead to fouling and biofilm which will impact the asset integrity, performance and the hydration and cross-linking ability of gel, and gel stability. It is critical to completely eliminate/kill these microorganisms in order to eliminate the scale and corrosion problem.

The multivalent cations and anions also impact the cross-linking ability of hydrated gel and gel stability. Most of the cross linkers used in hydrated linear gels are multivalent cation-based cross linkers such as boron, chromium, zirconium etc. But, so are the hardness-causing cations such as Fe, Ca, Mg, Ba, Sr, etc. If the produced water is being used as a base fluid for fracturing, having a higher amount of Ca, Mg, Fe, Ba, Sr, etc. might compete with or hinder the borate, chromium and zirconium cross linkers during the cross-linking process. It is essential to control the amount of hardness in the water to have an effective cross-linking gel system which will be stable at the desired temperature and pressure and which will be compatible with the base fluid for hydration.

Since the linear gel, cross-linked gel, viscous polymers and cross-linkers are heavily pH dependent, it is also critical to control the pH of the water. The carbonates, bicarbonates, carbon dioxide, sulfates etc. impact the buffer capacity of water. Thus reducing/removing these anions from the water is of great importance – not only to remove hardness, to protect from scale and corrosion, but also to ensure the effective hydration and cross-linking and overall gel stability.

The two core technologies found in the Hydro-Pod, oxidation and electro-coagulation, work synergistically to directly address all the impurities present, eliminating the risks they present in a cost-effective, safe, and in an environmentally-responsible way.

Mr. Stanley knew that after treating and addressing all the impurities in the produced, flow back and brackish water, of equal importance was to have a fracturing fluid system that is compatible with the treated water. He wanted to work with a company who understood the fracturing fluid system, have the expertise and R & D facility to address the quality control and quality analysis, one which could innovate and adapt, and which had a solid market presence and credibility among the operators and service companies. That is why he partnered with PFP Industries.

PFP Industries is a leader in the innovation of dry powder guar and guar slurries and is the second largest supplier of viscosifiers in the United States. Every produced, flow back and brackish water treated by Hydro-Pod technology to date has been successfully used as a base fluid for fracturing by using the PFP proprietary fluid system. The cross-link gel system created by Hydro-Pod treated water and PFP chemistry has been stable up to 2 hours and beyond, in both low and high temperature formations with viscosities above 200 centipoise at 100 reciprocal seconds.

The PFP proprietary fracturing fluid system will not only produce a stable gel system, but will include the precautionary reagents that control/mitigate any upcoming scale and corrosion issues. Once the water is used as a base fluid for fracturing after successfully hydrating and cross-linking a stable gel system, the issues of hardness, scale and corrosion won’t arise, as after this we will be pumping a viscous fracturing fluid. Even after the fluid breaks down and releases the water, most of the multivalent cations will be bound to the polymer/viscous material.

At RecyClean Services and PFP Industries, our ultimate goal is not only to provide the continuous access of consistent water quality to use as a base fluid for fracturing, but also a compatible fluid system that will address and eliminate all the risk associated with scale, corrosion, formation damage, etc. The solutions we provide will be scientific, cost-effective, and environmentally-friendly and combined with world-class technical expertise and services. 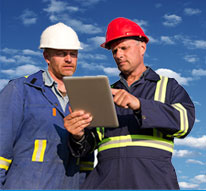 PRRO Water provides a sustainable and cost-effective water management solution as an integrated package for all types of waste water challenges. Our goal is to identify and implement the best combination of water treatment technologies and chemistries...READ MORE

PRRO Water provides a holistic solution by utilizing the innovative physical and mechanical technologies in combination with chemical solution...READ MORE